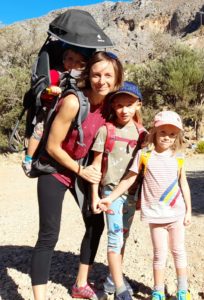 Myriam Montmory was borned in Quebec, Canada. At 18 years old, she started to travel around the world and soon discovered a passion for foreign languages. She holds a degree in International studies & Modern Languages from Laval University, Québec, and a master degree from Stendhal University, Grenoble, France. She also studied Chinese at Guanxi Normal University (China), Spanish at Universitat Autonoma de Barcelona (Spain) and now Greek on Kalymnos!

She is a language teacher, translator and manager of Kalymnos Climbing Guide with Simon Montmory  since they settled down on the island.

For her, climbing is a way of life: the occasion to travel, challenge herself, discover the most beautiful nature around the world and meet people… And Kalymnos offers it all together!